Many of us dream of discovering an exotic ‘barn find’ […]

Many of us dream of discovering an exotic ‘barn find’ in the woods and restoring it – but Julien Famchon came across the Ferrari 308 GTB of his dreams in the parking lot of his apartment. Finding the owner, however, was no easy feat…

Julien, thank you for chatting with us today! Tell us a bit about yourself…

“I’m a 42-year-old French car designer. I started my career as an intern at Pininfarina while I was a student, so was involved in various projects at Ferrari and Maserati, which was really incredible. Afterwards, I went to work for Peugeot and Citroen, then seven or eight years ago, I moved to Germany to work for Kia. I’ve owned loads of cars: some English cars, mostly sports cars, Alfas… everything.”

What drew you to the Ferrari 308? Was it your poster car or simply something you saw on the road as a kid?

“As a teenager, I had just one model car: a 308 – although it was a red Targa, not a black coupe. Ever since I started at Pininfarina, I’ve wanted one, but in recent years prices started skyrocketing. If I’d started my search 10 years earlier I could’ve afforded one, but that was obviously not the case.”

Why did you want that exact car?

“I first saw this car in 2016, while I was living in Turin, Italy. My block of flats had an underground garage where I used to park my Mini, and next to it was this 308. It looked like it had been sitting there for quite some time; there was a cover on it, but I recognised the shape immediately. I knew I couldn’t afford a decent one, but I thought as this car wasn’t in showroom condition, it might be an opportunity for me to realise my dream.” 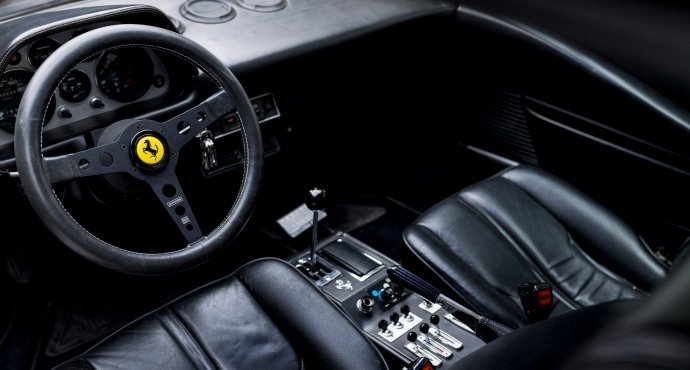 How long did it take to find?

“At the time, I had other cars, including an Alfa Romeo 2000 GTV, which had been completely restored, and a Ferrari 360 Modena. My goal wasn’t to immediately buy a 308, because I would’ve had to sell everything to afford one, and I wasn’t ready for that. However, I did some research and discovered that the car was owned by a man called Gian Piero Albanese, father of Satya Albanese – the owner of the flat with the allocated parking spot. So my goal in 2016 was simply to make contact with the son.

“I knew this car was a good starting point for my project. Obviously, it had been sitting, but it was a solid base to build upon. Every few weeks I would resume my search, which would continue for three years before I finally made contact with Satya. I initially found him on Facebook under a different name and messaged him in mid-2017. However, it was only in 2019 that he actually responded. Because I wasn’t his friend on Facebook, it was only through pure chance that he saw my message.

“Satya told me he was reluctant to sell, because it was a sentimental car that belonged to his father, who had sadly passed away. I understood this, because I have a watch that belonged to my father that’ll stay with me forever. Satya told me about his father: he’d worked in F1 for eight years and worked closely with Gilles Villeneuve. Gilles was actually the one who pushed him to buy the car in 1980, and they occasionally went for drives together.

“It turns out that Gilles also recommended some modifications to improve the car’s performance, which we discovered when I took it to a workshop. One of the main things we noticed was a switch to increase the brake pressure during hard driving. My mechanic couldn’t believe it, as he’d never seen that modification before. We decided to keep the brake upgrade, as it was part of the car’s history, and I now permanently leave the brakes with the increased pressure setting on.”

How did you manage to convince the owner to sell?

“I didn’t want to put any pressure on him — I recognised it was an emotional object. However, because we started talking about cars, our shared passion, he eventually relented. It was probably five months between us starting to talk and him deciding to sell. I think originally he was wary of dealers looking to flip the car, but I explained why I loved it, and I think he got the sense I wasn’t trying to make a profit.”

What condition was the car in when you found it?

“It had been sitting for 17 years in that parking lot, so there it needed a full rebuild and there were a lot of dents, which we managed to remove without disturbing the original paint. The interior was in perfect condition; all we had to do was rehydrate the leather and some of the plastics. Once the work was finished, the guy who restored the mechanics of the car told me it was absolutely perfect. It just needed a respray, but it had a really beautiful patinaand I don’t want to remove the car’s history, or make it too perfect, in case it puts me off driving it.

“The Alfa GTV 2000 had been restored, but I felt it lost its character; that was a mistake I wanted to avoid repeating with the 308. When I got the car, the owner hadn’t touched the interior, so there were papers from the ’80s, it was like a time capsule. It was really important for me to meet the original owner to learn its history. I found him, Lubin Palmer III, on LinkedIn – I had the service booklet and found his name on the ownership documents, so I tracked him down and 40 years later he was reunited with his car. Coincidentally, he’s also a car designer!”

After the restoration, did the 308 meet your expectations?

“When I started this project, I really didn’t expect to undertake such a high-quality restoration. I had a budget of around €45,000, purely for mechanical reconditioning, nothing cosmetic. In the end, it was really expensive, so I’m not that far off market price — I had to sell two cars to fund this project. I sold my Lotus Exige S1 to buy the 308 in the first place, and then I sold my Alfa Romeo GTV 2000 to fund the rebuild. The Alfa was particularly difficult to part with, because I it had been signed by Giorgetto Giugiaro.

“The guy who restored the car is Jochen Frick, who runs Die Sportwagen Spezialisten in Frankfurt. They’re really well known in Germany and specialise in the mechanical restoration of classic Ferraris. I was in the workshop every few days to discuss the restoration; there was a very high level of communication between me and the mechanics, which was really reassuring for me. The polishing of parts wasn’t included in the price, but the mechanic wanted me to work on the car myself, so over Christmas he gave me the tools and I polished every engine component. By the end, my hands were completely finished – I couldn’t write, I couldn’t do anything! Jochen didn’t go easy on me: I’d be polishing it to a mirror finish and he’d tell me to keep going. However, he’d always stop me just short of it being over the top.

“Now we’re great friends, I go around there all the time for coffee and to see what he’s working on. The workshop is in a really beautiful place in Frankfurt, it’s almost like a museum, so it’s a petrolhead’s heaven. The car is now so meaningful to me. I spent years tracking down the owner and then restoring it, and I had to sell two cars I loved to buy it in the first place, so I’m never going to sell it. I’m going to continue to drive that car every weekend for as long as I can.”

Photos by Nook_2M and Mark Reinert

Sat Aug 14 , 2021
Ever since motorcycles became a commonplace and widespread choice of […]