It’s tough out there for sports cars, especially for those […]

It’s tough out there for sports cars, especially for those brands making an effort to keep price tags reasonable. While models accompanied by six-figure bills increasingly soar on the wings of an electrical Icarus, more traditional fare lacking a hybrid helping hand has gradually faded from the market in favor of statement-making SUVs.

This is part of what makes the Nissan Z’s revival for the 2023 model year such an intriguing mix of recycled inspiration. Aware of the shrinking attention spans for sub-$40K sports cars, the Japanese automaker did its best to leverage the equity in its iconic Z badge by largely carrying over the previous-generation coupe’s chassis and pairing it with a significant power boost under the hood. The end result is a two-seat steed that serves to carry the Z’s colors into the future long enough for the trends to turn and bring affordable performance back into vogue.

The 2023 Nissan Z’s status as both a throwback and a step forward are referenced in both its mechanical details and its striking new sheet metal.

First impressions of the car strongly evoke no fewer than three of the Z’s predecessors. There is the obvious callback to the 370Z it replaces in the curve of its roofline and the shape of its side-glass, an unavoidable nod to their shared wheelbase and overall dimensions. More interesting details include the rectangular grille opening at the front (a clear lift from the original 1969-1978 S30 Z) and the wraparound taillights at the rear (dead ringers for the blinkers of the ‘90s-era 300ZX). Despite this trio of historical anchor points, the design comes together to create the first real evolution of the coupe’s countenance since it was revived as the 350Z nearly two decades ago.

The Nissan Z’s twin-turbocharged, 400 horsepower V6 engine represents another instance of futures past. Borrowed from the Infiniti stable, and sharing at least some of its heritage with the motor proffered by the GT-R supercar, it boosts output for Nissan’s sports car by roughly 70 ponies compared to the naturally aspirated six-cylinder that occupied the standard 370Z’s engine bay (50 more than the hotted-up NISMO model), adding a wall of oomph missing since the departure of the 300ZX Turbo in 1996. Much more important, however, are the extra 80 lb-ft of torque it has on offer, and the less industrial character with which the engine responds to the throttle. That combination of low-end grunt (with the 350 lb-ft max available between 1,600 and 5,200 rpm) and a smoother overall delivery transform the Z, and not a moment too soon.

We live in a world where customers shopping at the Z’s price point have grown accustomed to limitless reserves of twist pulled from the depths of muscle car V8s, not to mention the Toyota Supra-specific turbo six for those willing to reach a little deeper into their pockets. The 370Z’s raspy VQ engine may have overstayed its welcome, but its replacement represents a quantum leap in quickness for the Nissan. It also had me pondering what might have been for Infiniti’s Q60 Red Sport two-door, whose identical turbo engine would have enormously benefited from sharing the Z’s six-speed manual gearbox (rather than sticking it exclusively with nine-speed automatic, which is optional for the Nissan Z).

Pros and Cons of the Nissan Z

How does the Nissan Z’s assemblage of now and then come across when evaluated as a cohesive package? The results are somewhat mixed.

As a driving experience, the 2023 Nissan Z recalls much of what made the 370Z still feel compelling well past its sell-by date. Specifically, the Z is still willing to fully engage with drivers on roads both narrow and twisty, providing respectable levels of feedback through a platform that is stiffer (and unfortunately, somewhat heavier) than the one it builds on. Pair that with vastly improved power delivery and it’s possible to get yourself into situations that the Z’s stability control system feels compelled to reach in and correct. Turn off the electronic safeguard, however, and you can live in that liminal space between grip and slip nigh-on indefinitely provided you keep the throttle lively and the steering inputs counter. 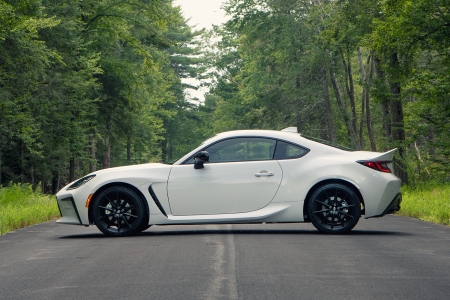 Getting to your favorite stretch of slinky road reveals that the new Z is saddled with some of the 370Z’s weaknesses, too. The car’s cabin is considerably noisier than one would expect from an automobile that can be optioned up to the $53,000 mark (for the Proto Spec launch edition), especially on the highway. A quick glance at the materials used throughout the Nissan’s interior is also disheartening, as the vehicle’s plastics, buttons and switches don’t paint a premium picture. Further pushing the Z away from the grand-touring aspirations that similarly powerful models like the Supra and the Ford Mustang GT evince is a cargo area that is both shallow and surprisingly narrow. A late night airport run underscored that asking the Nissan to accommodate the luggage requirements of more than a single traveler pushed past the car’s weekend fun mission statement.

Still (Thankfully) Made in Japan

Of course, the best thing about the 2023 Nissan Z is that you don’t have to spend $50,000 on it if you don’t want to. The $40,000 base model is not only cheaper than the most affordable Mustang GT, but it’s also considerably mightier than the similarly priced four-cylinder Supra model (which requires an additional $10K to graduate to turbo-six grunt), effectively slotting the Z into its niche as the stylish alternative to both.

Sure, the base Sport trim might be missing the limited-slip differential, 19-inch rims and bigger front brakes that were found on the Performance trim I tested (which also came with spoilers grafted front and rear), but fundamentally none of these features detract from the Z’s fun factor (nor does their presence transform it into a hardcore track warrior). The Z aims squarely for the middle, with more power and weight than the Toyota GR86 and Subaru BRZ that sit on the rung below, but not quite as much insulation from the act of driving as the plusher Supra.

It’s also worth pointing out that, unlike its would-be direct Tokyo antagonist, Nissan hasn’t farmed out the design and construction of its long-running two-seater. Whatever flaws might be present in the revised Z’s almost-all-new iteration, at the very least the brand’s bosses deem the badge’s heritage important enough to not interrupt what is now more than 50 years of in-house history. Maybe one day, when the vagaries of consumer taste have pivoted once more, we’ll get a clean-sheet redesign of the car that put Nissan on the map in the early 1970s. Until then, rejoice in the fact that what’s sitting in the showroom isn’t some other continent’s idea of how a Japanese sports car should look and feel.

This article was featured in the InsideHook newsletter. Sign up now.