Modern cars show how far the automotive industry has come […]

Modern cars show how far the automotive industry has come over the last few decades, but to many people, one has to drive a classic car to prove that they’re a proper gearhead. Classic cars serve as a time machine to the past and provide a driving experience that’s hard to find in modern options. Classic cars are also typically affordable due to depreciation, making them great options for first-timers and those working with tight budgets.

RELATED: 10 Classic Chevys That’ll Soon Be Worth A Fortune

Despite their benefits, classic cars can be hard to live with since their old parts may break down often, and finding spare parts can be challenging. But with proper research, you can find superb classic cars you can drive daily due to their bulletproof reliability and availability of spare parts. Here are ten of them.

Volvo is known for building boring but well-built vehicles with excellent safety ratings. However, the Swedish marque has shown that it also can build a quality sports car, which is exactly what the P1800 was.

Introduced in the ’60s, the P1800 is one of Volvo’s best cars ever. It had a stylish design that rivaled anything from Italy, great build quality, and even though it lacked power compared to its European rivals, it was still fun to drive. The P1800 holds the mileage record for a private vehicle, having covered over 3 million miles.

When Toyota established Lexus in 1989, it wanted to compete with top European Luxury brands like BMW and Mercedes-Benz. Its first car – the LS – quickly showed everyone that the Japanese marque meant business.

Lexus built the LS specifically to compete with the Mercedes-Benz S-Class, and it did so excellently. The LS was better than the S-Class of the day in every way and cost a lot less, making it a no-brainer for those interested in luxury sedans. The icing on the cake was that it had Toyota’s famous reliability.

The first-generation Golf GTI debuted in 1973 and impressed gearheads with its upgraded engine that made around 110 hp, fantastic driving dynamics, and affordable price. The Golf GTI became so popular that it has been a staple of the auto industry since.

Mercedes-Benz spent over $1 billion on the W140’s development, and the results didn’t disappoint. Its strong presence, luxury amenities, advanced technologies, and bulletproof engines made it a huge success.

In the ’80s, Toyota saw a huge opportunity to introduce an affordable, fuel-efficient sports car to the market to face off against the Overpriced European options. After several years of development, Toyota unveiled the MR2.

The MR2 was a huge hit. It had a superb design that earned it the ‘baby Ferrari’ nickname, lots of power, and since it was mid-engined, it was a joy to drive. Unlike its European competitors, the MR2 could be driven daily with minimal issues.

Ford has produced many iconic models over the years, but the Mustang is arguably the greatest. The Mustang is a big part of the reason why the muscle car segment emerged and has become popular worldwide.

The Mustang has been in continuous production since the ’60s, which means finding well-maintained and affordable classic models is pretty easy. Living with a classic Mustang is easy as parts are easily available, and with thousands of online communities, there’s a wealth of information on the car.

Saab no longer exists these days, but gearheads will always remember it fondly as one of the top European automakers of the 20th century. With roots in aerospace, Saab was famous for building high-quality cars with interesting quirks and features, and one of the best was the 900.

The 900 debuted in the ’70s with a unique head-turning design, innovative engineering and technologies, and fun-to-drive nature. Despite being one of the first turbocharged production cars, the 900 was known to be extremely reliable, which is why you can still find many of them on the roads today.

A few decades ago, Porsche built a series of front-engined sports cars in an attempt to attract gearheads who couldn’t afford the 911. The first car in the series – the 924 – was pretty bad, especially since it was powered by a Volkswagen engine. The 924’s successor, dubbed the 944, was much better.

RELATED: 8 Great Reasons To Buy A Porsche 944 (2 Reasons Why We’d Steer Clear Of It)

The 944 impressed many with its style, advanced engineering, and powerful Porsche engine, especially the turbocharged version. The 944 is still among the cheapest Porsches in the market, which is why we think it’s a no-brainer.

The AE86 needs no introduction, as it’s among the Japanese cars with the most significant cult followings around the world. The AE86 is a superb Corolla-based hatchback that Toyota introduced in the ’80s.

There’s a lot to love about the AE86, especially its super-reliable 112-hp all-aluminum 4A-GE engine and rear-wheel-drive platform that made it one of the best drifting cars ever.

The Mercedes-Benz E-Class has many awesome classic generations to choose from, but the W124 sits above them all. Built from 1985 to 1995, the W124 is widely considered to be the last of Mercedes-Benz’s over-built and over-engineered road cars.

The W124 offers an affordable way to own a fast, luxury German car, and we think its design is timeless. Even though it’s almost four decades old, the W124 has many modern technologies, including self-leveling independent rear suspension, ABS, soft-close doors, and a modern O2 sensor that improves fuel efficiency.

Tue Jan 24 , 2023
Afghanistan: The Taliban leadership is committed to changing the world’s […] 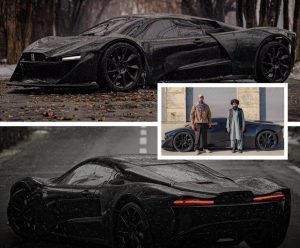